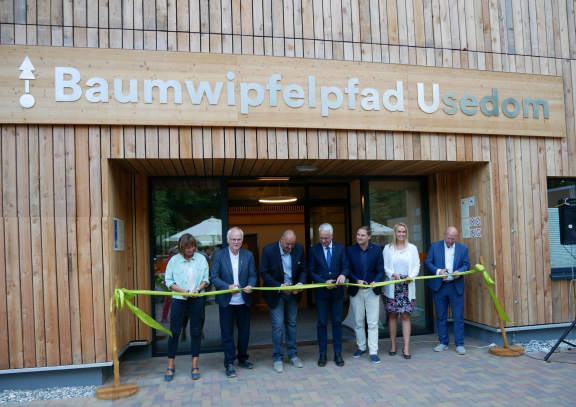 On 1 June, the treetop walk in the Baltic Sea resort of Heringsdorf opened its doors for the first time. Now the opening event, which was cancelled due to Corona, has been made up for.

On Friday, 30.07.2021, a number of invited guests came to the Treetop Walk Usedom   to take part in the official inauguration and to celebrate the opening, which had already taken place - not secretly, but quietly - at the beginning of June. Due to the Corona rules in force at the time, there was no opening event. The 25-member treetop walk team has now made up for this together with representatives from politics and administration as well as companies involved in the construction.

The 11th treetop walk of Erlebnis Akademie AG was officially opened in a ceremony hosted by Bernd Bayerköhler, CEO of Erlebnis Akademie AG. "We are very pleased that with the Treetop Walk Usedom we have been able to implement another project in a top tourism destination in Germany and believe that with this facility we fit in very well with the island's nature-oriented offerings and can enrich them," said Bernd Bayerköhler.In his welcoming speech, Dr Stefan Rudolph, State Secretary of the Ministry of Economics, Labour and Health of Mecklenburg-Western Pomerania, described the Treetop Walk Usedom as a highlight that the Kaiserbäder, the island of Usedom and thus also Mecklenburg-Western Pomerania deserved.  The path makes people curious about our homeland. For Patrick Dahlemann, Parliamentary State Secretary for Western Pomerania, the Treetop Walk Usedom is an interesting destination for excursions at any time of year, both for locals and tourists.

Around 6:30 pm, the green ribbon was ceremoniously cut at the entrance and Bernd Bayerköhler invited the group to take a walk together along the 1,350-metre-long path. The guests were impressed by the self-built learning and experience stations along the trail, which make for an entertaining visit. Full of excitement, the event participants made their way up the 33-metre-high wooden observation tower. Once they reached the top, some of them took their breath away - not from the climb, but because of the spectacular view over the entire island and the Baltic Sea coast. The group "Nimmersatt" provided entertaining performances in the entrance area and on the path.